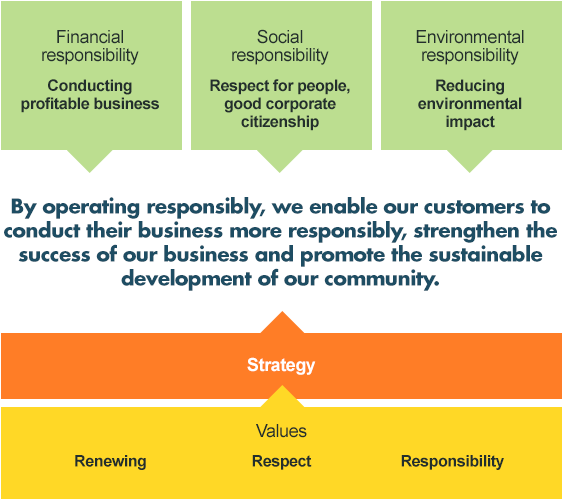 Edita’s corporate responsibility (CR) work is based on the triple bottom line: people, profit and planet. These three elements correspond to areas of social, financial and environmental responsibility, respectively, and form the basis of our CR approach.

Supported by our values of renewal, respect and responsibility, the CR program is firmly integrated within Edita’s business strategy.

We developed our CR program in 2010, and an important part of that process was our dialog with stakeholders in order to map their expectations. We have further measured employee expectations through our staff survey and taken in the views of Group management through interviews.

During our CR development project in 2010, we also defined which aspects are the most relevant for our work and which ones best reflect our desire to be a leader within the Nordic communcations industry.

We aim to be pioneers in developing communications, raising awareness of sustainability, enhancing environmental responsibility, attracting and retaining

employees, developing good leadership and promoting diversity. In addition to this emphasis on leadership, we also want to prioritize our relationship with our stakeholders.

This will allow us to be a reliable partner, develop openness and transparency, focus on knowledge sharing, promote work-life balance, and provide our staff with career and competence development opportunities.

We re-evaluate the CR aspects annually. In the end on 2012, we decided that the aspects we selcted in 2010 are still valid for us, and nothing was added or removed.

The full significance of CR for our stakeholders and its impact on Edita are described in Edita's CR criteria table below.

The criteria have been selected and their significance and impact have been evaluated by the Group’s CR team (CRI core team), the CEO and the top-level management of Group companies. 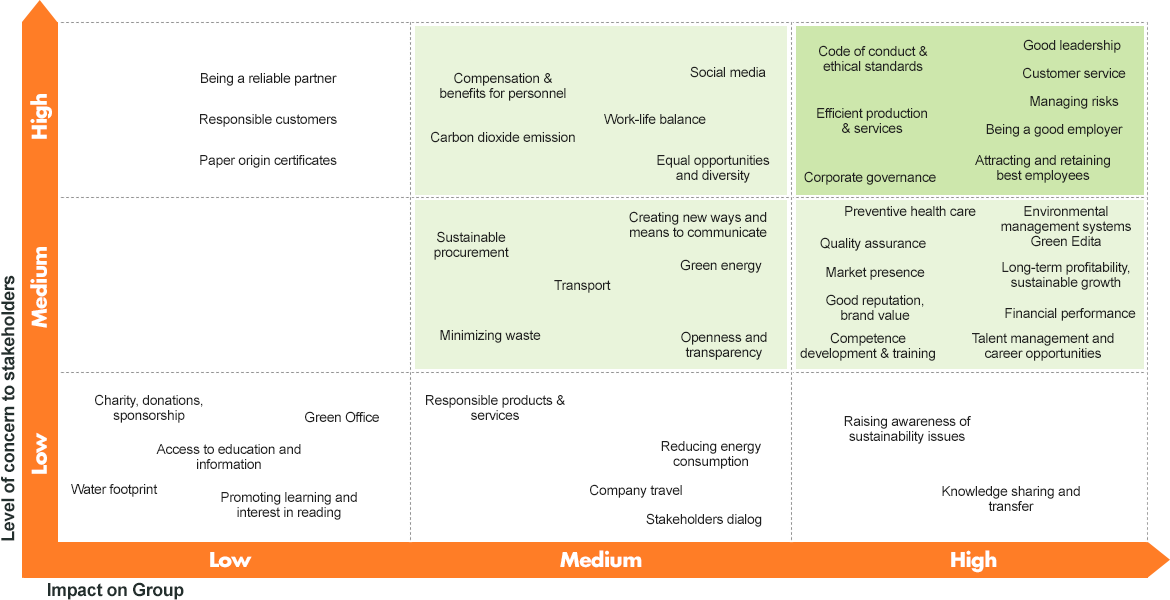 In connection with developing the CR program in 2010, we identified the following key stakeholders for Edita: employees, customers, the owner the Finnish state, partners, competitors, unions, the end users of our services and products, non-governmental organizations and society as a whole.

A dialog with our stakeholders is an essential part of Edita’s corporate responsibility and business operations. In order to succeed and develop as a company, as professionals, as an employer and as a partner, we need to listen to our stakeholders attentively.

Our aim is to offer all our stakeholders the information they need by having websites in both Finnish and in Swedish as well as in English.

In addition, we provide information about important business events directly to our stakeholders.

In 2012, we revamped our website (edita.fi / edita.se) in order to better serve our stakeholders’ information needs. The new website emphasizes more the issues related to CR as well.

We have defined 'Code of conduct and ethical standars' as one of our most important CR aspects. In 2012, we created Edita Group's Code of Business Ethics. It outlines the principles that everybody working for the Group has to follow in their everyday work and in relation to colleagues, employees, the company, partners and other key stakeholders. The Code involves our business partners as well.

In 2012, Edita sold products and services to its customers and other stakeholders for a total of EUR 115.5 million (107.6 million) and spent EUR 58.6 million (EUR 50.4 million) on buying goods and services from suppliers.

The total financial benefit generated by Edita for its stakeholders was EUR 59.1 million (EUR 55.6 million), of which most, EUR 51.3 million (EUR 48.8 million), was distributed to the staff as salaries, pensions and social costs. More information about financial responsibility. 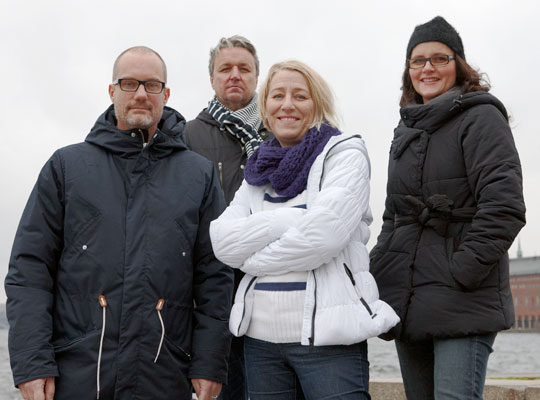 Good leadership is considered our most important CR aspect. Almost equally important aspects are 'being a good employer' and 'attracting and retaining best employees'.

In 2012, we created a new HR strategy, which emphasizes management, competence, commitment and wellbeing. The goal is to raise managerial work at Edita to a level that supports the wellbeing of employees and their commitment to the company. Accordingly, we defined the most important competences of an Edita manager. In 2013, we will launch two important management development projects, one for the subsidiaries' management teams and one for the young potential future leaders.

The other main goal is that all Edita employees had the possibility to develop as experts and perform well in their work. In 2013, we will start business specific competence development programs for employees.

Intranet Plaza is a central forum for the Group’s internal dialog between companies located in several countries. While promoting the spirit of togetherness, Plaza unites Edita’s employees across state and company borders. In Plaza, each company has its own intranet. In addition, the users have the opportunity to publish information for all Edita’s employees as well as to discuss and cooperate.

Once a year, we execute a Group-wide staff survey. In 2012, 72 per cent of our staff responded to the survey (2011: 77%). A total of 90 percent were of the opinion that setting an example in environmental work is important (2011: 85%). In 2011, 74 percent of the respondents considered it important for Edita to lead the way in social responsibility. This question was not included in the survey in 2012. 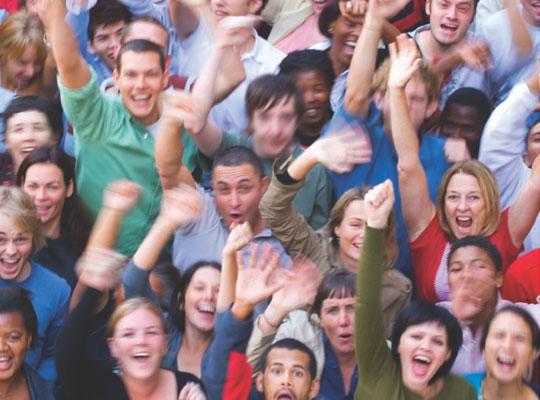 In its survey, Edita Prima has also inquired about its customers’ views on environmental work. In 2012, they added a question about social responsibility asking if it is important that a service provider is regarded as socially responsible company. We will include questions that are directly related to corporate responsibility in customer surveys of other group companies as well.

Our breakfast events, Edita Aamiainen in Finland and Edita Education in Sweden, highlight topical phenomena in the communication sector as well as CR issues. Even though these events are primarily intended to be tools for customer marketing, the video interviews of speakers will be published after the event on Youtube and Facebook, where anyone can watch them and join the discussion.

In February 2012, we gave an Edita Aamiainen about environmental responsibility in Helsinki together with our partners Helsingin Energia, an energy company, and CRnet, a service organisation dedicated to corporate responsibility.

Market research plays an important role in supporting customer interaction. In Finland we utilize primarily research information provided by the Finnish Association of Marketing Communication Agencies and the Federation of the Finnish Media Industry, Finnmedia, and in Sweden, information produced by the Institute for Advertising and Media Statistics (IRM, Institutet för Reklam- och Mediestatiastik). 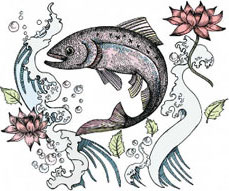 The owner of Edita Plc, the Finnish state, is represented as a member of Edita’s Board of Directors. Furthermore, the owner regularly receives information about our business in the form of various financial reports.

Edita is a member of several business and communications industry-related associations in Finland and Sweden.

Edita is a member of Finnish Business & Society (FiBS), a network of enterprises that promotes financially, socially and ecologically sustainable business.

Edita Västra Aros AB is part of the UN’s Global Compact initiative. This is a strategic policy initiative in which businesses commit to complying with universally accepted principles in the areas of human rights, labor law, the environment and anti-corruption.

Edita Prima Oy is a member of the Environmental Register of Packaging (PYR),

These companies have reduced the carbon-dioxide emissions generated by their operations and compensated for the remaining emissions by funding UN-supervised clean development mechanism projects in India.

Edita’s main production plants have certified their systems for monitoring the origin of the wood fiber used in their paper in accordance with international standards from the Forest Stewardship Council (FSC) and the Programme for the Endorsement of Forest Certification Schemes (PEFC). These printing companies are thus also entitled to use these labels indicating that the wood fiber used in their paper originates from a forest that is managed in a socially, ecologically and economically responsible manner.