A part of good corporate citizenship is pro bono work, where a company participates in the social development of the environment in which it operates.

Wollin feels that companies’ pro bono work is a source of pride for the personnel and promotes a good employer image. In addition, it sends a positive message to the company’s existing and potential customers.

As part of its pro bono work in 2012, Citat AB decided to support the Rinkebyakademien (‘Rinkeby academy’) project, which promotes opportunities for school children to get acquainted with working life, among other things. The project’s Skola efter Skolan (‘school after school’) activities provide secondary school-aged youth with advanced education in the subjects that interest them the most. It also offers possibilities to meet with professionals working in commerce and public administration.

It all started when Citat participated in a communications project involving residents of the Stockholm suburbs of Husby, Rinkeby and Tensta. The project aimed to reach gifted pupils in these multicultural areas and give them preparative training for working life.

Stavros Loucas, one of the founders of the Rinkebyakademien project, proposed an assignment to Citat’s personnel in Stockholm.

“It became apparent that the successful continuation of the project would require a high-quality website and presentation materials, which would help raise awareness about the activities and attract new sponsors,” Wollin says. “We became interested in the task, because it was a perfect fit for our expertise.”

“In the development work for the new website, we had the possibility to try out new responsive web design processes,” Wollin says. “Working with the Rinkebyakademien project has also allowed us to network with other companies who support the project.”

Wollin emphasizes that citizens with an immigrant background, who will make up one third of the Swedish population at the end of this decade, will become an ever more significant part of the workforce in the future.

“We want to be one of the companies that attracts the multicultural citizens of this ‘new’ Sweden – talented, well-educated experts.”

In 2013, Citat AB is also supporting the activities of the World Childhood Foundation, which aims to improve the lives of marginalized and exploited children.

"Communication transforms into conversations across networks"

Having noticed the description of the Nordic Bond 001 program in the intranet Plaza, Social Media Specialist Caitriona O’Connor from JG Communication decided to make an application.

"In the future,
multichannelling
plays the key role" 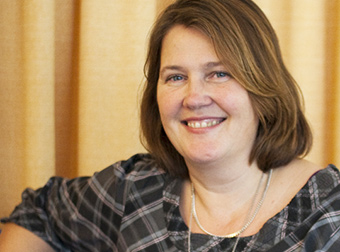 Steps towards
well being

In spring 2013 Liisa Raunio avoided taking the lift in order to raise the number of steps on her pedometer.